We are pleased to announce the Hardie Fellowships Program will open for Expressions of Interest in Term 2, 2023 for study in the United States in 2024.

The Hardie Fellowship is funded and named in honour of Professor Charles Hardie, who served as the Dean of Education at the University of Tasmania from 1946 until his retirement in 1976 and an international scholar and philosopher. He established an international reputation in the field of philosophy of education with his 1942 book, Truth and Fallacy in Educational Theory; with Albert Einstein writing to Professor Hardie admiring his 1947 book, Background to Modern Thought. He was handpicked by Ludwig Wittgenstein for his class, and he was a companion of John Maynard Keyes; both eminent philosophers.

Following the death of Professor Hardie in 2002, the Hardie Fellowship Trust was established under the terms of his Will and is administered by TPT Wealth, formerly known as Tasmanian Perpetual Trustees Limited, in its capacity as trustee. Income from the trust is used to provide fellowships for teachers in the employment of the Department for Education, Children and Young People (DECYP) who have demonstrated outstanding skills to enable them to pursue advanced studies or research at a University in the United States for a minimum of 6 weeks.

The Hardie Fellowship provides the opportunity for individuals or groups of teachers and school leaders employed by the Department for Education, Children and Young People (DECYP), to undertake professional learning and tertiary study in the USA. This study will benefit participants, schools and the DECYP as a whole. Fellowships are available to study for up to 12 months. 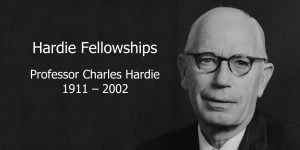 An eligible applicant must be: